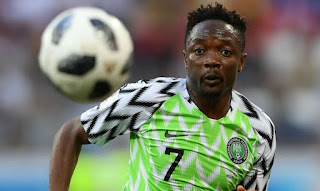 The squad that will face the Central African Republic’s national team in world cup qualifiers in Lagos and Douala next week has been revealed by Gernot Rohr, the head coach of Nigeria’s national football team.

While Ahmed Musa, the captain of the Super Eagles, will lead the squad, other seniors such as Wilfred Ndidi and Etebo Oghenekaro will be unable to play due to injury.

Mr. Bassey is eligible to play for Italy, Nigeria, and England, but he will make his Nigerian debut next week.

ALSO READ:  Solskjaer said he is the right man for Manchester United job

On Thursday, October 7, the day 3 match will take place in the Teslim Balogun stadium in Lagos, with the day 4 match taking place in Douala, Cameroon on Sunday, October 10.