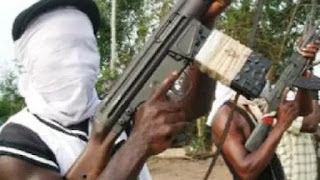 It was unknown at the time of publishing this report if anybody was injured in either of the two offices targeted, however United Reporters learned that a bystander was struck by a stray gunshot.

According to eyewitnesses, the gunmen arrived in four SUVs from Owerri Road and halted at Emecourt Road Junction, where they fired bullets, causing passers-by to flee for safety, before proceeding to the premises, which they also lit ablaze.

“They then proceeded to Nnobi Road via the Nkwo Triangle Roundabout.”

“An armoured military vehicle appeared later and drove about town, passing along Emecourt Road. The military and the gunmen did not meet, therefore there was no exchange of fire,” the insider added.

The spokesperson for the State Police Command, DSP Toochukwu Ikenga, acknowledged a fire in Nnewi but declined to name the offices involved.

“At around 2 p.m. on the 3rd of October 2021, the command got a distress call of a fire occurrence in Nnewi,” he added. Police officers are now on the scene, and the area has been sealed off. He said, “Further details will be given.”