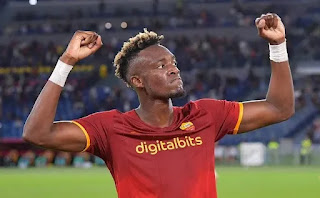 Tammy Abraham, a former Chelsea striker, has revealed how Roma manager Jose Mourinho convinced him to move from London to Rome.

Abraham, who rejoined the England team after a year away, told media ahead of England’s Qatar 2022 FIFA World Cup qualifying match against Andorra that Mourinho has a plan for Roma and that he wants to be a part of it.

“The first thing he said to me was, ‘Do you want to enjoy some sun or stay in the rain?'” he explained. I burst up laughing! Jose got a goal. I saw where he wanted Roma to go, and I wanted to be a part of it.”

The 24-year-old also discussed how the former Chelsea boss has aided him in his performance and in his personal life.

“He is a nice man who has helped me a lot so far,” he added. I’ve learned more tactically in the last year than I have in my whole life. Jose stated that the fans will be looking at me to invigorate the squad.

“I knew there would be a lot of eyes on me from the start. I needed to make a good first impression, and I succeeded.”