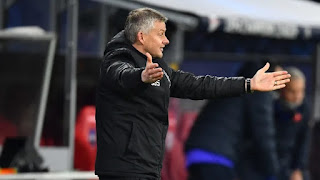 Manchester United boss Ole Gunnar Solskjaer blamed his team’s 1-1 draw against Everton on a lack of “cutting edge” and vulnerability to counter-attacks.

Solskjaer’s side seized the lead via Anthony Martial, but Andros Townsend’s counter-attack strike kept them at bay.

The manager stated that the ‘key lesson’ Man Utd must take away from this disappointing draw is to be more vigilant to prospective counter attacks, pointing out that counter attacks nearly cost them the game in the Champions League.

“We launched a couple counter-offensives at them. I’m not aware of the statistics. I believe we possessed the ball for the majority of the time. They didn’t play through us, they counter attacked.

“On Wednesday night, it was the same. When not to risk it, when not to be counter-attacked, we need to be better. Today’s lesson is that they do generate huge opportunities on fast breaks,” Solskjaer remarked.

“Well, there was a section of it that was extremely excellent. We got off to a good start, had a lot of enthusiasm, scored a beautiful goal, and went into halftime with a 1-0 lead. We lacked the cutting edge in the second half to grab the second goal, which is crucial in a game like this. You concede a goal five seconds after a corner which we have. That was the part that was disappointing.”

ALSO READ:  Solskjaer said he is the right man for Manchester United job