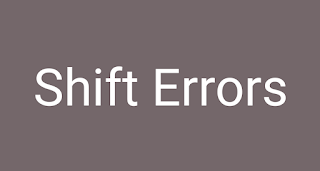 Shift errors refers to the unnecessary change in verb tense (past or present), point of view, mood, voice or vice versa within a sentence or paragraph. Writers are cautioned to avoid unnecessary shifts because unmotivated shifts between present or past may obscure meaning and confuse readers. However, sometimes a shift is necessary to indicate a change in the timeframe of the action, but it is the unnecessary shifts that sometimes cause awkwardness and should be avoided.

Shifts in verb tense are created when a sentence moves between past, present, or future tense. This is especially common in narrative essays, but can also occur in academic essays, which should use present tense. Sometimes, the verbs in a sentence may refer to action that is occuring at different times, which would require different tenses. Otherwise, maintain consistent tense, unless the intended meaning requires change.

Example: During the soccer game, Daniel’s dad “stood up” and “screams” at the coach.

In this example, the first verb, “stood,” is past tense. The following verb, “screams,” is present tense. If he stood up (past tense) he must scream in the same tense, which would be “screamed.”

Correct Example: During the soccer game, Daniel’s dad “stood” up and “screamed” at the coach.

Second Example: The teacher “explains” that the papers were due Friday, but the students ”complained” about the due date.

Correct Example: The teacher “explains” that the papers were due Friday, but the students “complains” about the due date.

Third Example: During the baseball game, the sky “darkened,” the wind “blew up,” and a rumbling boom “announces” the impending storm.

In this example, the time frame is introduced as past tense: “darkened” and “blew up” are both past, so “announced” should be the past as well.

Correct Example: During the baseball game, the sky “darkened,” the wind “blew up,” and a rumbling boom “announced” the impending storm.

Writers should not be fooled by the introductory words, “during the game.” Even though “during” means an action is continuous in general, it does not mean that the sentence action is necessarily continuous.

How to avoid shift in verb tense

Using many different tenses within your writing and shifts between tense are fine, as long as they accurately represent the action described by the passage. Where learners sometimes encounter difficulties is when they mix verb tenses within a sentence or description.

The verb tense expresses a sense of time in a sentence, paragraph, paper, or longer work. Generally, the writer should establish the time perspective (past, present or future) in the opening sentence and maintain that tense consistently throughout his or her work.

ALSO READ:  How To Use "Many" and "Much" In A Sentence

How to correct shift errors in verb tense

In a passage where a shift error in verb tense has occurred, go through and highlight each of the verbs and verb phrases. Change the tense of the inconsistent verbs or verb phrases to align them with the primary tense that has already been established.

Reread the passage aloud and listen for consistency in verb tense. You can also refer to a list of irregular verbs in a dictionary or style guide as an aid for choosing the proper form of the verb

First-person point of view involves the speaker alone or with others and uses first-person pronouns: (Singular pronouns: I, me, my, mine, Plural pronouns: we, us our, ours).

Second-person point of view involves addressing the reader directly and uses second-person pronoun: you, your, yours.

Example of second-person point of view: If “you” want to take control of “your” finance, “you” should cut up “your” debt, and save for emergencies and retirement.

Example of third-person point of view: “People” who want to take control of “their” finances should cut up “their” credit cards, make a budget, pay off “their” debts, and save for emergencies.

Examples of shift in point of view

I. As “we” rode into town, “you” could hear the silence of the frightened residents.

II. When “I” listened to Bach, “you” could almost feel a mathematical rhythm taking over “your” thoughts.

III. If “we” did not text while we drove, “you” would not have as many accidents as there are.

These three sentences exhibit a shift in point of view. The point of view changes because the use of pronouns changes. In the first sentence, we start with the pronoun “we (first person) and shift to the pronoun “you” (second person). This shift hurts our writing style, and make it inconsistent and incorrect.

How to avoid shift in point of view/pronoun shift errors

We can maintain a consistent point of view and avoid shift in pronouns in two ways, which is the use of the same pronoun in our sentences, but a better solution is to use a noun in the first part of the sentence. In this manner, the pronoun used in the second part becomes almost obvious.

I. As “we” rode into town, “we” could hear the silence of the frightened residents.

II. When “I” listened to Bach, “I” could almost feel a mathematical rhythm taking over “my” thoughts.

III. If “we” did not text while we drove, “we” would not have as many accidents as “we” have.

The examples above covers maintaining a consistent point of view. Take a look through the sentences. With the exception of this sentence, you will notice a “we” (first -person plural) point of view.

To improve our writing style in English, we must maintain a consistent point of view in our sentences and throughout the entire paragraph or essay.

When a sentence has two or more verbs, both verbs should stay in the same voice. Inappropriate shifts in voice from active to passive or vice versa can really be confusing to the reader. So let’s look at some examples in order to avoid this common mistake.

‘When Jim turned on the microwave, a crackling sound was heard.’ The verb ‘turned’ is in active voice, but then ‘was heard’ is in passive voice, so there’s an obvious shift to passive voice. To fix this, we would rewrite the sentence to say, ‘When Jim turned on the microwave, he heard a crackling sound.’ Now both verbs are in active voice and the sentence is written clearly.

It is generally preferable to use the active voice over the passive voice. Sentences in active voice tend to flow more smoothly and are easier to understand. Here’s an example that illustrates this: ‘That article is being read by the entire class.’ This sentence is written in the passive voice with the article as the subject, but the class is doing the reading. To make this clearer, we can rewrite it as, ‘The entire class is reading that article.’ Now it is in the active voice with the class as the subject, and the article is directly receiving the action of reading.

ALSO READ:  Introduction To The Novel: The Problem Of Definition

In some cases, the passive voice may be a better choice, but only when the doer of the action is unknown, unwanted, or not needed in the sentence. Here are a couple of sentences that work better in passive voice: ‘The exams have been graded.’ ‘Sometimes our efforts go unnoticed.’ The first sentence is written in passive voice because who graded the exams isn’t said, but it is automatically understood that teachers graded the exams and stating that isn’t necessary. The second sentence, also in passive voice, communicates how the speaker, presumably a teacher, feels about his or her work and how little he/she feels it’s appreciated. The goal here is to emphasize the efforts that don’t get recognized rather than to focus on who doesn’t recognize them, so this is purposefully written in passive voice.

Mood is the manner in which an action takes place or a thought is expressed. While shift error in mood are created when there is more than one mood in a sentence. The types of moods in a sentence includes indicative, imperative, interrogative, conditional, and subjunctive.

Indicative mood indicates a state of fact or something that is or isn’t happening in reality. Most sentences in English are written in the indicative mood.

Imperative mood is a command. It means that something must be done. In most imperative sentences, the subject (you) is not added, but is understood.

Interrogative mood asks a question just like a police officer “interrogates “ his or her suspects.

Conditional mood depends on conditions. There have to be a certain condition for it to happen.

Subjunctive mood is a wish or a way to explore uncertain or imaginary situations. It is rarely used but it is important to be able to recognize it in order to avoid shift errors.

Example: “Read the instructions” carefully and you “must assemble” the equipment completely before beginning the procedure.

In this example “Read the instructions” is imperative. The following “must assemble” is indicative, so there’s an obvious shift in mood.

Second Example: Come to our dance this weekend, and you might want to bring your boyfriend, too.

In this example, “come to our dance” (imperative). The following “might want” (conditional), so there’s an obvious shift in mood.

How to use ‘Some’ and ‘All’ correctly in a sentence

The most common mistakes in English