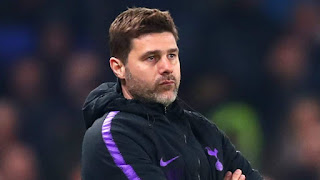 Mauricio Pochettino, manager of Paris Saint-Germain, has reacted to his team’s 2-0 loss to Rennes in a Ligue 1 match on Sunday afternoon.

After Rennes defeated PSG, Pochettino stated that he was “very dissatisfied with everything.”

Both goals were score by Gaetan Laborde and Flavien Tait for the hosts against the visitors.

Pochettino reacted by saying it was unfortunate that PSG did not win Rennes since they performed really well in the first half.

“I think we needed to score because if you want to win, you have to score, but I also think we played extremely well throughout the last 25 minutes of the first half. In fact, it’s rather nice.

“It was unfortunate that we didn’t score because we should have gone back to the locker room up 2-0, but instead it was 1-0 to them. It had a huge impact, and then to surrender with the first chance of the second half was even worse. It was tough to accept, and Rennes had that belief, which made it difficult to produce.

“However, the game was open because we needed to take risks, and of course, I’m really upset with everything.” Yes, I believe we now require those two weeks, but the players will be on international duty,” Pochettino stated at his post-match news conference.