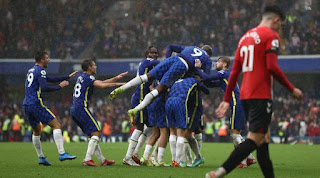 Last weekend, the Blues were defeated at home by Manchester City, and in a champions league match, they were defeated by Juventus in mid-week.

Chelsea took advantage of Southampton’s James Ward-red Prowse’s card in the 77th minute to seize control of the game, which had been tied at 1-1.

Trevoh Chalobah gave the Londoners the lead after nine minutes.

Trevoh Chalobah nodded the ball into the net after a corner was taken and Ruben Loftus-Cheek earned an easy header.

On 61 minutes, Southampton equalised when James Ward-Prowse won the battle of wills and slotted an unstoppable penalty past Edouard Mendy into the bottom left corner.

Chelsea immediately grabbed control after Ward-Prowse was sent off, with Timo Werner scoring the second goal after unleashing a first-time shot from within the area that beat the goalie deep inside the net.

Southampton’s troubles were compounded when Ben Chilwell converted a rebound into the top left corner after the ball broke to him in the area, making it 3-1.