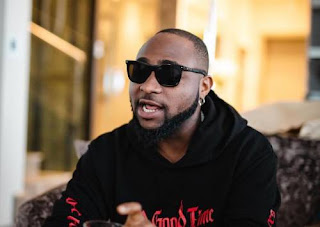 David Adedeji Adeleke, better known by his stage name, Davido, claims he got into trouble during the #EndSARS protest when one of his albums, ‘A better time,’ became the movement’s song.

Davido stated this in a recent interview with Trevor Noah’s “The Daily Show.”

Despite the fact that he did not write the music for that reason, the singer expressed his gratitude for his song being used to symbolise the people’s voice.

He claimed he got himself into so much trouble that he had to leave the nation for a while.

He said, “I did not record that song thinking that was going to happen but it’s amazing how I saw my voice being an instrument for people, it was amazing, I got into a lot of trouble, I had to actually leave the country.

“It was that bad, but it was amazing to see people come out like that and I will say this, they listened, they heard us, they might not have changed anything but they were shocked. I see a lot of young future leaders coming out in the next general elections, things are going to change.”

Many Nigerians came to the streets in October 2020 to protest police brutality as part of the #EndSARS movement.

The Nigerian Police Force’s Special Anti-Robbery Squad (SARS) was disbanded as a result of the demands.

Meanwhile, the song “FEM” had been published a few weeks prior to the start of the protest. It was, by chance, designated as the protest’s anthem.

The words of “FEM” echoed across Nigeria as young Nigerians poured out into the streets to protest police brutality.

A video of Babajide Sanwo-Olu attempting to address protestors outside the Lagos State Government House appeared online at the time.