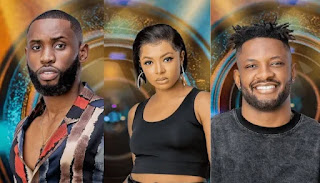 Big Brother Naija Shine Ya Eye housemate, Cross, stated that he intended to share Liquorose with Emmauel, her love interest.

He informed Pere and Whitemoney of this in the early hours of Saturday, day 70 of the programme, following the Jacuzzi party.

Cross expressed his delight that Angel had returned to the house because he hoped to grow closer to Liquorose.

“If not, I would have gone to share Liquor with Emmanuel,” he explained. I promise I was going to do it. I swear to you, I was going to get closer to Liquor.

“I know I was joking, but I knew I was going to become closer to Liquorose, if not romantically, then at least intellectually. I’d like to hear her tale and learn more about her. I was looking forward to meeting her.

Pere then chimed in, claiming that most of the roommates are unaware of Liquorose’s history.

“Do you believe what I said on Sunday was a joke? If you didn’t come back, I’d go share liquor with Emmauel.

“After I know your own story, will I be looking at you in your eyes? I’ll get bored. And I don’t like to get bored.

“I’ll come up with something to do. I’ll have to make something up in my head to do. So, in my mind, I knew I was going to get closer to Liquor; learn her tale, invite her to gist with me, and I’d tell her my own.

“From there, we’ll begin to bond more. If Emmauel so desires, he should get enraged. I’m not going to kiss her; I simply wanted to get to know her.

“As a result, God in heaven brought Angel back here. I was overjoyed. ‘Thank God,’ I replied. Angel kept me company on Monday, Tuesday, Wednesday, and Thursday, but she hasn’t stopped since Friday. That her partner she enjoys outside, she likes the person a lot.”

Cross had previously claimed that he did not understand Angel’s mood swings, but after Whitemoney encouraged him to love Angel, he realised that he was not the right person for her.