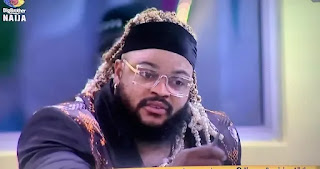 Whitemoney, a BBNaija finalist, explains why he asked ousted housemate Michael for forgiveness during the last Saturday night party.

It should be noted that Biggie once again welcomed all housemates, both evicted and finalist, to a party in the house, marking the show’s last Saturday night party.

Following the party, Whitemoney confessed to Pere that he had requested Michael to forgive him due to the incident with Jackie B.

“I told Michael to forgive me during the party. I didn’t do anything wrong but just had to apologize so he’ll not beat me outside the house because of Jackie B.

“Michael is a matured person but I don’t know the condition with a Jackie outside so I just apologized,” he said.