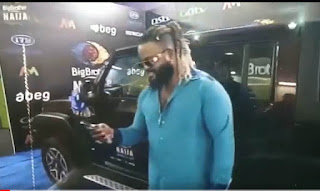 For winning BBNaija season six, White Money got a N30 million cash award as well as a brand new INNOSON G40. After garnering the most votes. The 29-year-old won the N90 million grand prize at the show’s finale on Sunday.

The Odogwu One was also given keys to a two-bedroom flat in Lagos state’s Lekki axis at the award ceremony on Monday.

White Money ultimately beats out 26 other housemates to emerge as the grand prize winner of Naija’s biggest reality show, Big Brother Naija, after 72 days of intensive activities, excitement, and trepidation.

Emmanuel, Angel, Cross, and Pere were evicted in the grand finale on Sunday, leaving Whitemoney and Liquorose as the top two housemates vying for the N90 million grand prize. At exactly 8:42 p.m., the show’s host, Ebuka, announced White Money as the winner, with Liquorose as the first runner-up.

ALSO READ:  BBNaija: WhiteMoney reveals why he asked Michael to forgive him during Saturday night party