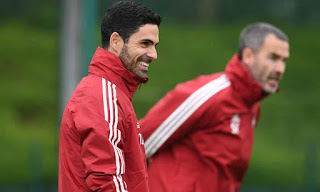 Mikel Arteta, the manager of Arsenal, was awarded Premier League manager of the month for September.

The Gunners were defeated by Brentford on the opening day of the season, then lost at home to Chelsea and were thrashed 5-0 by Manchester City.

Arteta’s team, on the other hand, turned their fortunes around with a 1-0 win against Norwich, with captain Pierre-Emerick Aubameyang scoring the only goal.

Martin Odegaard, Arteta’s new acquisition from Real Madrid, scored from a well-taken free-kick to give Arsenal another 1-0 victory against Burnley.

Arsenal defeated Tottenham by three goals to one in the north London derby, which was won by the Spaniard.

ALSO READ:  The 20 nominees for the women's ballon d'Or 2021 has been revealed

In response to the accolade, Arteta told Arsenal Media that it represents the team’s togetherness in the face of adversity.

“This award reflects the way everyone has come together, worked together, and remained optimistic in difficult times,” he added.

Despite starting the season at the bottom of the Premier League standings, Arsenal has steadily improved their position.