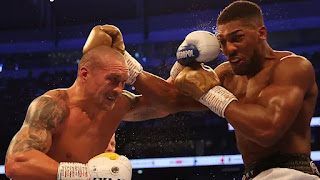 Ruiz, who defeated Joshua in June 2019 before the Briton won their rematch six months later, said that Joshua was “hesitant,” “scared,” and “probably underestimated” Usyk throughout the fight.

Remember that Joshua lost his WBA, IBF, WBO, and IBO titles to Usyk in a unanimous points decision at the Tottenham Hotspur Stadium.

Joshua was also defeated for the second time in four fights.

Ruiz told FightHype, “I believed Anthony was going to be the stronger man.”

“I believed he was going to use his skills to box him [Usyk] about.

“He just sort of lingered there. I’m not sure why he wasn’t moving about as he was the second time we fought.

“He raced about making sure he wasn’t hit, and if he was, he grabbed and moved around. So that was his plan. However, things did not go his way in this bout.

“It was most likely the incorrect tactic. He most likely misjudged him. It’s similar to what I did with Chris Arreola (in May where Ruiz won via unanimous decision).

‘I believe Anthony Joshua is still alive and well. I got the impression he was afraid and was holding back a little. Maybe it was Usyk’s lefty style and the way he moves.”

ALSO READ:  Pochettino reacts after PSG was defeated 2-0 by Rennes

Meanwhile, Joshua is poised to face Usyk again next year in a rematch in order to reclaim his world heavyweight belts for the second time.

On Thursday, Joshua told his supporters on Instagram that he had observed and learned from his battle with Usyk.